Let me explain what the situation was when I wrote this piece. It was about 30 degrees outside.

I was sitting next to the husband who was cursing at his phone because the Buffalo Bills was losing to the Houston Texans. We were in the car waiting for the 2:30 p.m. soccer game: CSU Pueblo vs. Regis. The middle child was warming up somewhere before the game.

We were on the last leg of our Colorado trip—which meant staying in Pueblo, Colorado before having to drive back to fly out of Denver.

I was trying not to admit to the simple fact that it was warmer in Fairbanks, Alaska, and I was ignoring the fact that in a few minutes I would step outside under that unwavering cold to watch a soccer game.

The trip to Colorado (the second time this year) was planned as the last hurrah as soccer parents. And, true to form of our lives, the itinerary was planned around the middle child’s soccer schedule.

Also true to form, the husband and I (more me, actually) wanted to explore Colorado a bit more and to do a few things that we have yet to do.

I’ve decided to focus on the three cities that we visited: Aurora, Denver, and Pueblo.

I have to give credit where credit is due: the husband found a place where he knew I would squeal like a child on Christmas morning upon its discovery.

He discovered after a bit of Googling: Stanley Marketplace in Aurora, Colorado.

He was actually looking for a place to have breakfast when stumbled on Stanley Marketplace—and to me, I felt he found what I now consider one of my favorite places.

We came back at least three times to hit up a few spots.

I ordered the shrimp and grits, while the husband ordered the waffle-biscuit sandwich concoction–the sandwich was drenched in maple syrup and there was no complaints on its audacity to be that good.

It was a good way to start the day. 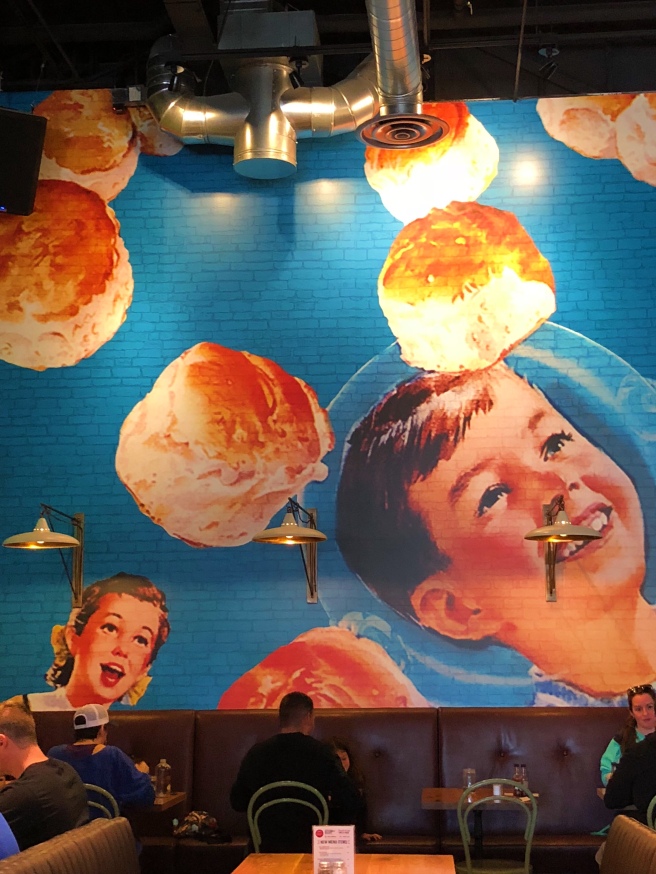 This cute little shop would have been heaven to the Primadonna if she had been with us. I thought of her back in Fairbanks where she was keeping up with school, her ballet classes, and Nutcracker rehearsals.

As I picked up a few bath bombs for the Prima, I can’t help but miss her being by my side.

On our last day in Aurora (before we took the drive down to Pueblo for the soccer games), we decided to stop by Stanley Marketplace one last time.

Rosenberg’s was the way to go for breakfast that morning. Plus, I was fascinated by their endless menu of all things traditional: bagel.

I will ask for forgiveness that I actually tried their atlantic salmon that was cured to perfection. It was my first time tasting salmon not from Alaska–and I’ve mentioned before that I am a self-proclaimed Salmon Snob.

I was not disappointed in the flavor, but it did solidify my preference for the good ‘ole Alaskan salmon. To avoid getting struck my lightning for such blasphemy,  I did the holy cross before I took a bite of the bagel stuffed with the salmon, capers, onion, and cream cheese.

The husband, true to form–ordered the basic breakfast bagel with eggs, jalapeno cream cheese, and bacon.

Of course to balance the savoriness of the bagels–we also decided to pick up some donut holes.

Mondo Market and The Juniper Pig

I can spend all day at Mondo Market, and The Juniper Pig staring at the products. I walked through the store imagining that I was in Tuscany with plans on making pasta for dinner and eating it all al fresca.

But, I had to remind myself, “you’re in Aurora, Jen–and it’s 30 degrees outside.”

I wanted to take the whole store with me.

I bought a few things…

A jar of locally made peppermint lotion.

Why the handful of straws?

Because I left my favorite rose gold eco-friendly straw at Snooze.

Yes, I was devastated.

The husband and the two sons attempted not to giggle at my devastation.

One night, we returned to Aurora from spending the day with the eldest son and future daughter in-law that we didn’t want to think about dinner.

We went, and fell in-love with everything.

I must say that Annette’s is right up there with 229 Parks in Denali.

The dishes are created and meant to be shared.

We started with the shoe string fries. It was so good that the husband ordered another bowl and ate it by himself.

We moved on to the gnocchi and all the cheesiness and herbs that coated the bowl. The gnocchi were these potato pillows that melted in your mouth. There was nothing left in the bowl.

Our main entree was the sea bass on a bed of arugula greens coated with some chimichurri dressing. The sea bass was cooked to perfection and its skin was crispy with a hint of smokiness of the grill.

The entire meal was topped off with a blackberry sorbet, and a toffee cookie that sandwiched an orange and sage (yes, sage!!!) ice cream.

We’re still talking about this meal.

An Alaska Sunset.
Monday vibes.
First blooms, and first radish.
Centerpiece. Spring has sprung in #Fairbanks #Alaska
I bake, I write, I blog—it’s what I do.
Garlic Necklaces. Essay on The Echo Muse. Blog link on my bio.
Loading Comments...
%d bloggers like this: